No Respite in Sight for Global Gas Markets 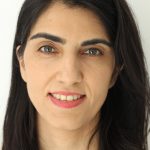 Two LNG supply-related news last week have added further strength to global gas prices: the recent explosion at the Freeport LNG facility and gas shortages in Australia.  These developments have boosted near-term prices and have also given support to winter European prices, as Europe has been reliant on LNG imports, especially from the US east coast, to refill storage.  These, in addition to all the other existing supply problems and lack of near-term new supply, leave the global gas market in a frenzied state.  Any prolonged period of cold, or further supply disruption – particularly Russian piped supply, could deepen the current gas market crisis.

The recent explosion at the Freeport LNG facility has removed 1.8 bcm/month of LNG capacity. Given the extent of the damage and the regulatory inspections around it, the plant is now expected to be fully shut down until the end of September and only partially operational by the year-end.  This is bad news for European gas buyers, who were relying on flexible US LNG exports to fill up storage levels in preparation for peak winter demand.

Meanwhile, Australia – the world’s largest LNG exporter last year – is facing gas shortages of its own. With the start of the peak winter demand in Australia, electricity prices on the east coast have skyrocketed and power outages now overhang parts of Queensland, New South Wales, and Victoria states.  Underperformance at coal power plants and a shortage of gas supply are blamed for the crisis, but calls have been made for the government to limit gas exports from east coast LNG projects and prioritize Australian markets instead. This could reduce LNG supply further.

In the past year, global hub prices have broken new records and experienced significant volatility due to a chronic global shortage of gas supply. This was an unthinkable outcome just a couple of years before as new LNG supplies and record-high Russian piped gas had depressed prices for much of the last decade. The high prices in 2021 were initially driven by short-term bullish fundamentals such as higher than expected seasonal demand, low storage levels in Europe and several other supply disruptions.  Together, they created a remarkable swing from all-time low prices and widespread supply shut-ins to record high prices and winter shortages in a matter of a single year.

Meanwhile, the Russia-Ukraine conflict at the beginning of this year has tipped a tightly balanced market into the crisis zone. Since February 2022, the global market remains in the grip of a supply shortage, despite significant demand destruction, caused by high prices, and storage levels being back at normal levels. Far from the subdued summer prices, European gas hubs are grappling with high volatilities and markets are reacting strongly to any hint of supply disruptions.

Europe’s increasing reliance on US LNG

Prior to the Russia-Ukraine conflict, European markets were relying on flexible, low-cost US LNG to meet their peak winter demand (see chart below). With tightening supply in Europe and the reversal of JKM-TTF spreads into negative territory, increasing number of US LNG cargoes have been diverted to European markets. By January 2022, 75% of US exports were being sent to Europe and we expect European markets to continue to pull on US LNG to build up gas storage this summer, although some LNG imports are constrained by import capacity and access to regasification terminals. 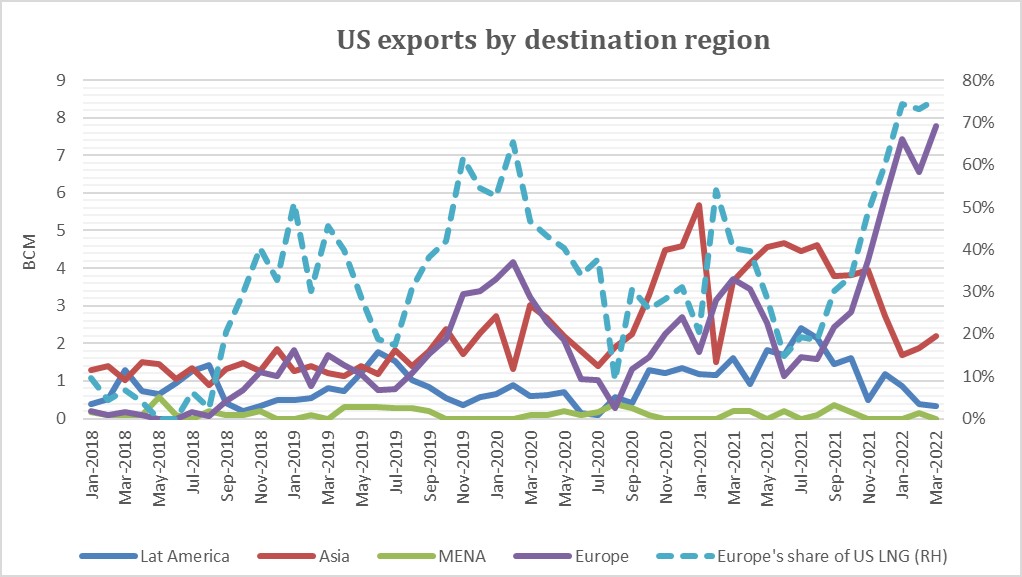 Source: US Department of Energy

Freeport is one of the most flexible US LNG projects with significant uncontracted volumes that have been directed to European markets in recent months. Europe will be most impacted by its shut-down. We have modelled the loss of Freeport supply in our Mithras Global Gas model in line with the operator’s timeline of the outage.  Accordingly, we expect a 3% / month drop in the overall global LNG supply, at around 44 bcm per month in summer before increasing to 47 bcm/month by December 2022. Meanwhile, the modelled prices for NW European hubs are expected to have increased by ~7% from our base case scenario for summer months – just on the basis of loss of Freeport supply — before easing down with the gradual return of Freeport LNG. 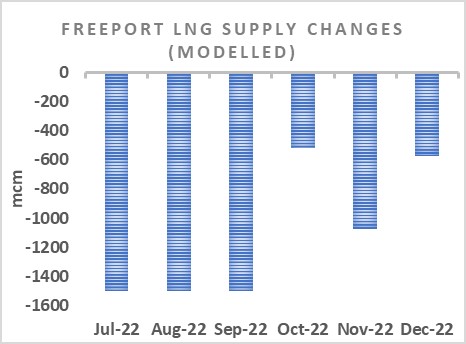 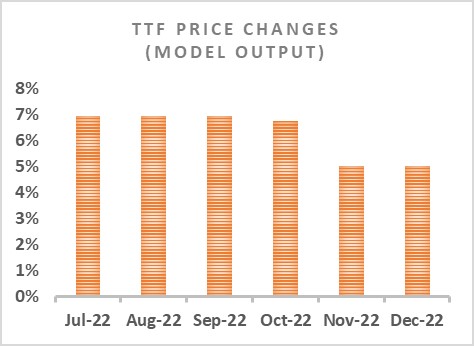 This is assuming everything else remains the same. In reality, there are many other moving parts in the gas markets which could push the prices higher or offset some of these increases. Just as the markets were assessing the impact of Freeport’s shut-down, Gazprom announced a technical breakdown in Nord Stream-1 and a 40% reduction in flows, adding to the European market’s woes and sent prices higher.

Australia became the world’s largest LNG supplier in 2021 with estimated exports of over 110 bcm/year. But Australia’s LNG exports this year has been something of a mixed bag. Whilst east coast LNG projects (AP LNG, GLNG and QCLNG) had performed strongly in the first six months of the year, supply was curtailed at North West Shelf (NWS), Prelude and Darwin.

The ageing fields feeding NWS are in decline whilst Prelude FLNG (a floating production and processing unit) was shut down for several months following technical problems and safety concerns. The potential reduction in east coast exports during the Australian winter months is likely to push exports below 2021 levels for the second half of the year.

In our base case we have assumed Australian LNG exports in 2022 to be on par with 2021. However, we’ve run a scenario (on top of the Freeport run) whereby Australian exports are reduced by an average of 0.5 bcm per month between Aug 2022 – Mar 2023. The modelled price for TTF has gone up by an average of 14% during this period, pointing to the compounded impact of supply shortages on prices. 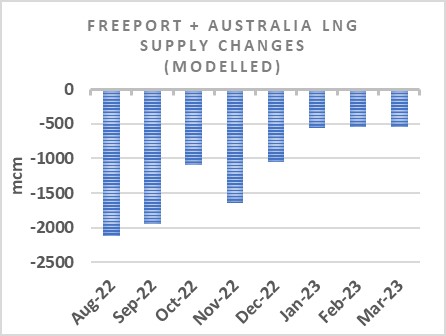 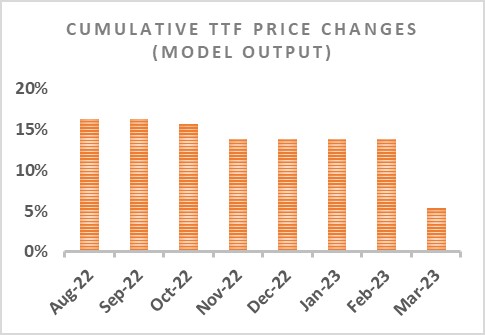 US LNG exports, currently accounting for 12% of the country’s gas production, had been steadily taking a larger share of US natural gas production and its share is about to increase further with a number of under-construction and new LNG projects in the pipeline over the next few years. The Ukraine war has put an impetus behind US LNG projects and new investment decisions on additional LNG plants are expected in the next 12 months (see our note on Driftwood LNG moving forward).

The US gas markets have been caught off guard by seismic developments in global markets as discussed above. The ever-widening gap between HH and European and Asian hub prices had created a strong pull on US LNG, particularly from Europe.  Many US LNG facilities had been running at the maximum capacity throughout winter to take advantage of high prices. Meanwhile, US storage levels have been below five-year levels, whilst domestic gas demand has been higher this year.

We expect US gas markets to largely balance itself by next year, although will remain highly susceptible to global price volatilities and weather-related spikes.  With limited additional LNG capacity coming online between now and next year and a rebound in investment in new production, US domestic gas prices should fall back to more of a normal levels in the short term.

Although recent supply incidents are mostly impacting volumes at summer months, several factors will cast a long shadow over gas prices for the coming winter. European markets’ ability to fill up storage before winter is key to winter prices. Other risks are around Russian supply, winter weather and LNG supply.

The biggest threat to European winter prices (and by an extension global gas prices) come from Russian piped supply. Russian flows through three main import routes have dropped by over 30% since the start of Ukraine conflict and can go down further. A significant reduction in Russian supplies in winter months can send shockwaves through European economies. According to the European Central Bank, a hypothetical 10% rationing of gas (modelled on 10% loss of electricity output) can shrink the EU’s GDP by 0.7%.

As always weather-related risks will weigh on winter prices, particularly in a tight market. A particularly cold winter will deplete storage much faster and can create large supply imbalances. In the worst-case scenario a persistent cold spell in the northern hemisphere can drive up demand both in Europe and Asia simultaneously, leading to severe shortages which will affect most markets. And finally although there’s little new LNG expected by 2023, further delays in start-up of new LNG supply scheduled in the next 12 months can lead to physical shortages as well as psychological impact on market prices. Tangguh train 3 and Coral FLNG are both expected to be in service by the end of 2022.