European gas markets on a knife edge this winter

North West European markets are on a knife edge this winter – they can just about cope this winter with no piped gas from Russia, if they can meet both the storage fill level targets and the demand reduction targets recommended by the EU.

European gas markets are on a knife edge this winter – they can just about cope this winter with no piped gas from Russia, if they can meet both the storage fill level targets and the demand reduction targets recommended by the EU. Failure to meet these targets, due to a cold winter or strong Asian LNG demand for example, may result in further, forced, demand reductions. With such a tight market, prices will be both high and volatile this winter.August 2022

Amid significant reduction of Russian gas exports leading to supply shortages and very high global gas prices this year, the European Union (EU) have announced a number of measures to tackle the impending energy crisis and its economic impact in the upcoming winter. Of the measures announced in recent months, two gas-related developments are particularly important for winter balances and worthy of further investigation.

1. In May 2022, the EU member states agreed to set the minimum storage fill level at 80% by the end of October, rising to 90% for the following year.

2. After much wrangling and discussion, the EU members have also agreed on a collective and voluntary reduction of gas demand by 15% from the 1st of August 2022 to the 31st of March 2023. The new measure has a number of exclusions to gain enough support from all members and to help smaller countries to respond better to the crisis. For example, the Baltic countries who heavily rely on the Russian power grid have been exempted in order to be able to increase their gas burn in the event of power cuts.

In this analysis, we are looking at how far North West European markets have gone to achieve these targets and whether these measures will be enough to avert a full-on crisis in the event of no Russian piped gas into the EU this winter.

Heroic mission to fill up storages to the brim

Europe is in a fortunate position to have significant storage capacity, which has been instrumental in balancing its peak winter demand.  This year, European gas storage operators have been on a heroic mission to fill up storage from five-years lows to the 80% regulated by the EU by the end of October amid widespread supply shortages and very high prices.

This first target appears to be within reach. As of the 22nd of Aug, EU gas storage is 77% full, whilst North West European storage (including the UK) is already at 80% of its working capacity, with only the Netherlands still at 72% full.

This has been a remarkable achievement given the market circumstances and has been done through a reduction of demand (coal to gas switching where possible and some demand destruction at the industry sector) in addition to substantial LNG purchases since the beginning of the year. However, despite significant government financial and political backing to enable European buyers to buy LNG at record prices, LNG imports have been constrained by the available import capacity and limited global supply and its success this winter will hinge on the availability of both. See our note: No Respite in Sight for Global Gas Markets.

Now with Nord Stream-1 flows currently at 20% of capacity and announcements of further maintenance on the pipeline in September, achieving the overall 90% storage fill target is looking much more difficult.  Will the existing storage capacity be sufficient for Europe to get through this winter or will Europe run out of gas? Also, to what extent will the agreed 15% demand cut, if it can be achieved, close the supply-demand gap this winter? 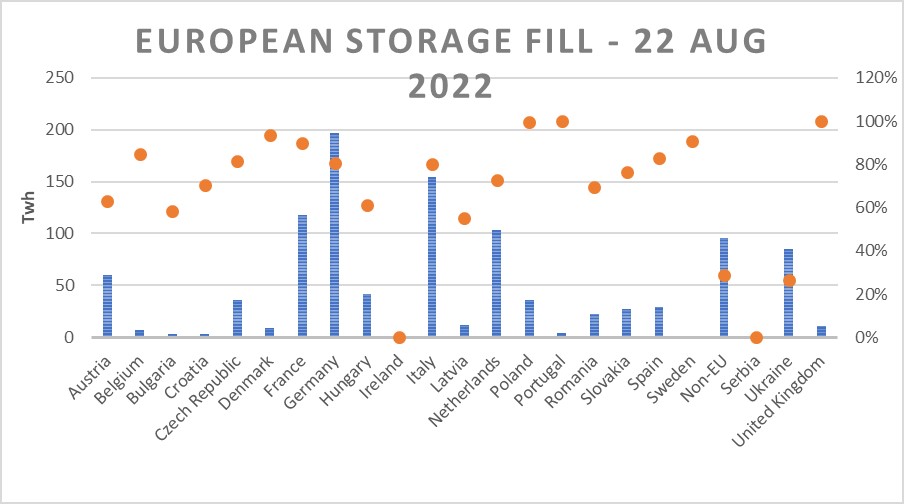 Most European markets rely on a diverse range of supply sources to meet their gas demand.  In this analysis, we have focused our attention on balances within the well-connected North West European region (Belgium, France, Germany and Netherlands) but a similar exercise can be applied to the rest of the EU.

A unique set of circumstances in the last three years have pulled gas demand in different directions with markets experiencing a number of highs and lows in quick succession. Winter 2019 was a relatively warm winter with abundance of new, flexible LNG supply and low commodity prices. This was followed by a cold winter in 2020/2021, in addition to higher demand following a rebound in economic activities post lockdowns. Meanwhile, unexpected supply shortages were the main theme in the winter of 2021/2022.

Our analysis of the average of the last three-year “winter” balances shows that in the event of no Russian pipe supply, the North West European (NWE) markets will be able to weather the worst this winter, if they can meet both storage fill level targets and demand reduction targets recommended by the EU. Even so, this will be a very tight market and prices will be highly susceptible to daily extremes if one or more factors fall short of expectations. 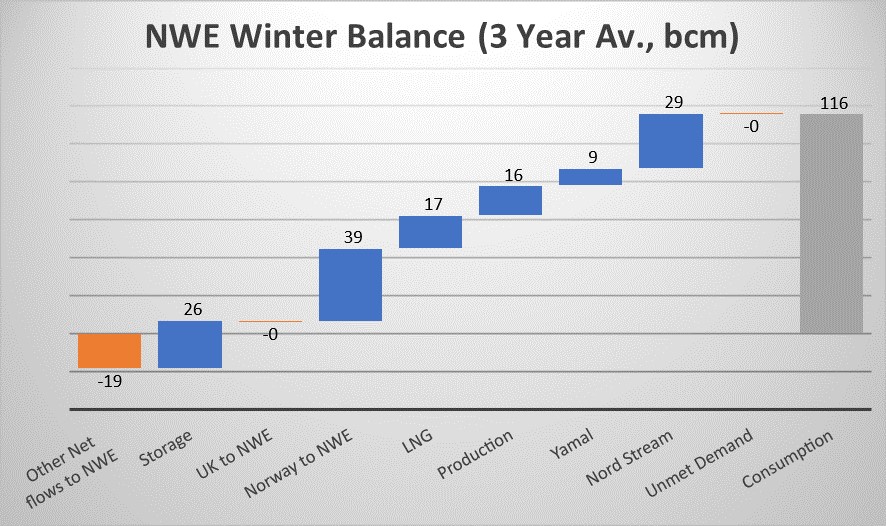 Scenario 1 forecasts that winter gas markets can just about cope, if a number of critical assumptions are met: 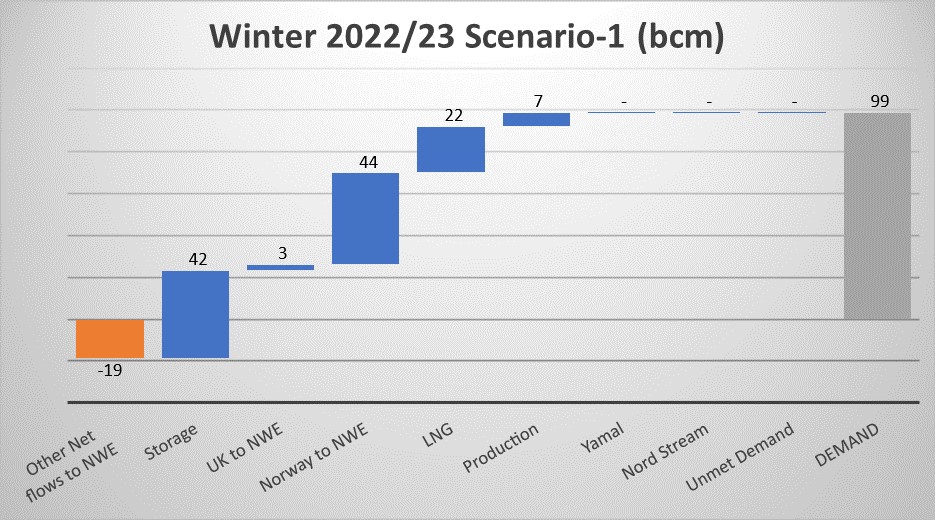 Figure 3 – Assumed balances for this winter under scenario 1

In Scenario-2, we have assumed gas demand to be at the higher range of the last three years at 123 bcm for all the four markets. This could be either because of a particularly cold winter or the projected generation from other fuels within the power sector fails to materialise. Under this scenario, even if NWE is able to utilize all its 90% storage capacity and the maximum LNG import capacity and assuming a high Norwegian import, there will be an estimated of 9 bcm of unmet demand just in these markets. 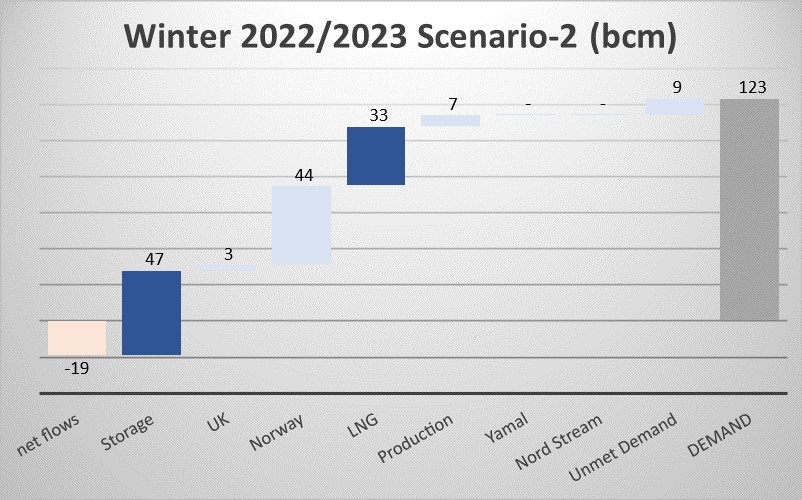 Figure 4 – Assumed balances for this winter under scenario 2

EU will explore all options to contain economic fallout

The above exercise shows the extent of the energy crisis facing Europe. We expect the market prices to be highly volatile this winter as supply and demand are so finely balanced, with no slack in the system and any disruption to supply or demand, no matter how short, will send the markets into a frenzy. Asian LNG demand has fallen sharply this year but there is still uncertainty around gas demand in Asia this winter.

It is also clear that the EU is currently exploring all the possible options to contain the economic fallout of the current energy crisis. One of the less publicized options is increasing gas production from the Groningen field in the Netherlands, should there be a severe gas shortage. The field still has about 400 bcm of recoverable reserves of low-cal gas. Whilst production levels are envisaged at 4.5 bcm for this year, there is room for higher production from the field. Some gas saving (albeit limited) can be made via extending the life of nuclear plants in places like Germany as well as bringing back the mothballed coal power plants. The latter has already been given the green light by Germany’s legislative houses. And in Southern Europe, a new agreement has been signed to increase gas imports from Azerbaijan, while negotiations are ongoing with Algeria to broker a deal for additional gas.